What if Phil Greene improves on the gains he made last year? Or just gets more smart shots up?

Share All sharing options for: In review/ preview: Phil Greene, the x-factor

The stalwart guard Phil Greene IV obviously holds a special place in Steve Lavin's rotation. Unlike many of the other players we've profiled, Greene's minutes have hardly wavered. His fewest minutes came in a home game against DePaul and the road game against DePaul, where he struggled.

And Greene's role has changed a bit from his first two years. Was it the addition of Rysheed Jordan, and the need to let him do his thing? Or is it that the staff realized that PG-IV could and should play a different, more off-ball role? 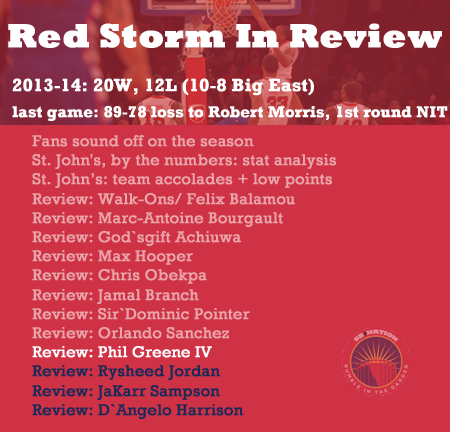 The transformation of Greene

In his first two years, Greene was a guard given license to run the team, despite playing as more of a ballhandling two-guard who put up a lot of two-point shots - sometimes to solid, efficient effect and sometimes... not.

The problem with Greene's offense as a part of the Red Storm attack was twofold.

Fold one: the Johnnies already took a lot of mid-range jump shots, shots that rarely draw fouls and are generally less efficient than taking a three-pointer or getting a decent shot at the rim.

Fold two: Phil Greene, despite having stretches with okay assist numbers, is not a point guard. His passes often come a dribble too late to find an open man, when his drive has been bottled up; and in his first two years, many possessions began with his dribble and ended with his runner, with no other Red Storm player involved in between, except for a possible screen.

But in the offseason, Phil Greene IV developed. Or his role did, anyway.

Instead of taking runners off the dribble - a hard shot to master - Greene found himself in the corner, taking - and reliably hitting - three-pointers.

The Red Storm have struggled to find a three-point shooter who can also stay on the court defensively and provide other skills on the offensive end. There may be debate about whether Greene is a lockdown defender, but there's no debating that he at least tries and gives effort on defense.

Greene's percentage of shots taken went down. And his efficiency went up, over the one point per possession threshold, making him more of a plus on offense. A team player, Greene's ability to play the game without turnovers improved, and he had one of the best turnover rates in the country.

He would have been even better if his two-point shooting percentage didn't dip below 40%. He shot 33% on two-point jumpers, specifically- which include runners and long twos - and rarely got to the rim.

Greene knows it's a place where he can improve, telling the Rumble that in the offseason he worked on "finishing around the rim and through contact.... refining my whole game."

Greene's junior year was a fascinating change - a player whose development doesn't happen between freshman and sophomore years but between sophomore and junior seasons.

Can he keep up the gains and become an even better player?

What's next/ areas for improvement

Steve Lavin still looks to Phil Greene as a settle-things-down ballhandler and team leader, evidenced in the preseason game. Greene took the reins for a time while Jordan and Branch struggled to make good decisions on the court.

It's a good role for short periods, but a role that changes the shape of the St. John's offense. Branch and Jordan are far better at breaking down defenders and finding an open man with a pass. Both are also far better at drawing foul contact.

But both turn the ball over on more than 20% of their possessions. It's a hard balance for Steve Lavin to strike, the desire to have a team that gets all the chances it can to score versus a team that plays riskier players who can be explosive in a team concept.

And that also takes Phil Greene away from spotting up for a jumper with his feet set. Nursing an injury, Greene went 0/3 from the field against Humboldt State.

His shooting is too much of an x-factor to stifle it with ballhandling for the Red Storm.

Last season, Greene drew a career-high 43 free throw attempts. That's just over one attempt per game, a low number for a team that needs to find ways to score in bunches. A shot and one for the foul is a way to score in bunches - and control the tone of the game.

Shooting percentages from distance can ebb and flow. If Greene can maintain that 40% success rate from beyond the arc - and perhaps take a few more shots from there - he opens lanes up for driving guards, helps suck out packed-in opposing defenses, and gives the Johnnies a weapon to put teams away with.

Get more good shots up

The Johnnies should get scoring from Rysheed Jordan and D`Angelo Harrison, and early returns bode well for Chris Obekpa's offensive engagement.

But what about the rest of the scoring?

While a return to the one-on-many offense and runner isn't what the Red Storm need (all the time; sometimes, that is a good way to put pressure on an opponent), Phil Greene needs to get a few more shots up per game. PG IV hit double figures in only eight of his 32 games. And while that is good team play, the Johnnies need some scoring punch with Jakarr Sampson gone.

If it can be smart scoring punch - the guards finding Greene open on the perimeter for three-point shots - the Red Storm offense will weather the... winds of the Big East and challenge for an NCAA Tournament berth.

But if Greene can be that third or fourth scorer? He can end his senior season with a bang.