Right now, Rysheed Jordan is a scoring guard. Can he become a point guard and leader for Steve Lavin's squad?

Share All sharing options for: In review: Rysheed Jordan's areas of potential

Steve Lavin found himself with a single scholarship at the end of 2013, as Amir Garrett chose to leave the program.

He went after the dynamic guard Rysheed Jordan, and picked up his most highly-rated recruit of his tenure as head coach of the St. John's Red Storm.

Despite not winning Rookie of the Year, Rysheed Jordan was a dynamic force for the Red Storm on good days. There were some days where freshman mistakes undermined his effectiveness. And there were some games where he wasn't there - a suspension, a family issue, an aunt's death, and tonsillitis.

Jordan missed small chunks of time, and struggled early with some of his responsibilities as a college student-athlete under Steve Lavin. But Jordan is back - even if he isn't allowed to speak to the media - and expected to make a jump befitting his talent.

Can Rysheed Jordan make the sophomore leap this season and become the player who leads the Red Storm back to the NCAA Tournament? 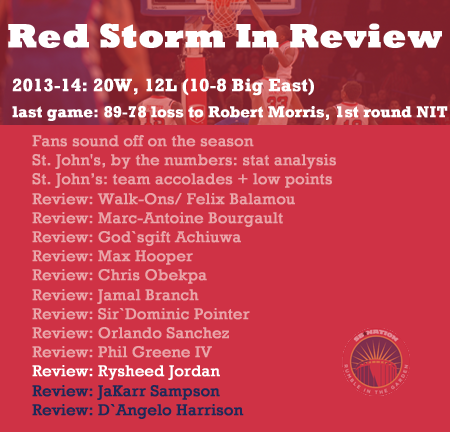 The summer of Jordan

Supposedly, Rysheed Jordan's summer workouts have him in better shape and improving his jump shot. Sure, that's the kind of thing every player says, but Jordan has been working out with Ellis Gindraw, who had some good insights.

“I watched all of his high school games [at Roberts Vaux High School] and a lot of his college games,” said Gindraw, “and because of his talent — he can get to the hole at will — he was too comfortable in high school.” Jordan traveled home and worked out with Gindraw about seven times this summer, and each time Gindraw focused on expanding Jordan’s comfort level with his jump shot.

The piece goes into how Dion Waiters (former Syracuse guard, now with the Cavaliers) has taken Jordan under his wing after noting the similarities in their games.

Jordan is expected to make a leap - and there is a lot to start with, and a lot to leap to.

What's next/ areas for improvement

The one-man fast break struggled to score at times

Rysheed Jordan was able to get his own shot easily in the Red Storm offense, and Gindraw's "too comfortable" comment rings true. On the high school level, he could break down any player he wanted to.

We'll add a shot chart for illustration, thanks to our friends at VU Hoops.

Rysheed Jordan shot well from the top of the key and from one side of the rim; but his perimeter and corner shooting were lacking.

But when he couldn't get to the rim, he shot 31% on two-point jumpers - lower than D`Angelo Harrison, who missed a lot of shots inside the arc - and 28% from beyond the arc, worse than his fellow guards.

He can improve in all areas. In last week's preseason game, after getting more under control - and taking the opponent seriously, one could say, by respecting that going one-on-five is not a good idea even against high school players - he scored 18 points in the half.

All but two of the points were from the field, and he hit a pair of threes.

The scoring potential is there.

Those other areas of improvement - decision-making

But to be a solid point guard on any level, a player has to provide a combination of

Jordan has not excelled at any of those yet. And his decision-making needs work. With eight turnovers against Humboldt State, Jordan ran the gamut of bad passing, iffy ballhandling in traffic, and offensive over-aggression.

Aggression from Jordan is needed - he's too talented not to put pressure on defenders. But he has to know what a winning battle is, and when to make a different choice - a pass to an open defender (best), stepping out of trouble to reset the offense (solid), or a pull-up shot (an okay occasional choice).

When engaged, Rysheed Jordan can shut down touted players like Tyler Ennis of Syracuse.

When not fully engaged, Rysheed Jordan is the player who repeatedly went under screens while defending sharpshooter D`Vauntes Smith-Rivera in St. John's road loss to Georgetown. Those were good, well-timed screens, but Jordan simply needed to do something different and not allow Smith-Rivera so much space.

That defense, DraftExpress thinks, could be Jordan's key to making it to the NBA next season.

There's so much to improve on in Jordan, the highest-rated recruit of Steve Lavin's tenure at St. John's. He could be amazing, the kind of player who, when let loose, drives opponents crazy - and frees up shots for talented scorers like D`Angelo Harrison and now, apparently, Chris Obekpa.

But Jordan has to play within a team concept, pull the strings like a point guard, and understand that the ability to create one's own shot isn't a license to do it over and over again; it's a threat on the floor that helps keep defenders honest, while Jordan operates the team.