With the season so close, we solicited some comments on what the fans felt about last season.

Share All sharing options for: Fans sound off on the 2013-2014 St. John's basketball season

It's a bit late for a postmortem on the season, but St. John's fans can certainly understand how hard it is to encapsulate the season in a single story.

It was like there were different teams on the floor, struggling to understand the other members of the team despite a core that played together for years.

Last season started with cautious hope and an enigmatic team, included some uncomfortable wins, hard-fought defeats, a number of complete dud games and a hot streak - and then ended with the thud of an anvil on a thick marble floor, a loss to Robert Morris, the low seed in the postseason NIT, on the Carnesecca Arena floor. 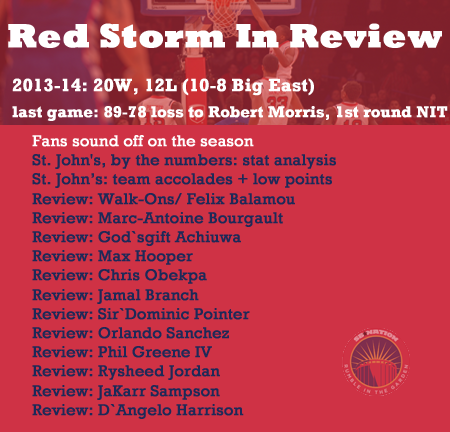 The team played in hot and cold spurts, even in early season wins and close early-season losses; early game struggles would be glossed over with late rallies.

But those early struggles and lack of gelling, execution, inability to play 40 minutes of good, crisp basketball - all of those were signs of problems that would keep the Johnnies on the outside of the NCAA Tournament, when their schedule gave the team little margin for error.

How could a team that seemed so talented struggle so mightily?

Using our social media accounts, we asked about the highs and lows of the season. And there were a lot of negatives... even when we asked about positives (click the Facebook links below to see the comments).

Not making the tournament. RT @rumbleSBN We want your take: what was the worst aspect of last year’s St. John’s men’s basketball team?

@rumbleSBN everything minus recruiting, there is no offense. You can't be a good team when you pass it around at half court for 25 seconds

@rumbleSBN lack of a consistent lineup

@rumbleSBN defense from big men. Especially from Obekpa. Have to play tough and not back down

A positivist would say that the Red Storm are making, in Steve Lavin's words, "incremental progress." And 20 wins is a nice number for the team.

Still, the Johnnies were expected to reach the NCAA Tournament and maybe make some noise, given the wealth of well-regarded talent the squad came into the season with.

Is the patience of St. John's fans wearing thin? Winning heals wounds, and a St. John's team that can make the NCAA Tournament will be forgiven for a winning year that felt, to some fans, empty and in need of improvement.

Big men Orlando Sanchez, Jakarr Sampson, God`sGift Achiuwa, and shooting wings Max Hooper and Marc-Antoine Bourgault all leave the program. But so much potential returns. And with that potential come expectations from the fans.

Much of the core returns, with leading scorer D`Angelo Harrison and star rookie Rysheed Jordan in the backcourt, plus backups in Jamal Branch and Phil Greene IV with potential for solid performances, but with inconsistent results.

Sir`Dominic Pointer made his name with his defense but saw inconsistent minutes last year on the wing as Lavin played guard-oriented lineups (or went big with now-departed Jakarr Sampson at wing). Felix Balamou played four games last season despite originally being held out as a redshirt.

The frontcourt features shot-eliminator Chris Obekpa, who has some jumps to make in his offensive and defensive performances. But the rest of the frontcourt is a question mark, with the best, third-best, and fourth best defensive rebounders leaving.

Christian Jones, a late recruit in 2012, had a game where he flashed his ability against Marquette, but how will he play given extended time? Can JUCO import Keith Thomas provide the consistent presence on defensive end of the glass that the Red Storm sometimes struggled with? And can he provide any presence on the offensive glass, finding some points from all of those missed shots? Will Adonis Delarosa be able to contribute for stretches for the Red Storm?

We delve into the numbers and stories of last season, and start to look ahead - in the next few weeks.