A deeper look into the numbers behind the Johnnies strong defense, inconsistent play and unreliable offense.

Share All sharing options for: St. John's 2013-14 capsule: the highs of the defense, the lows of the offense

The 2012-13 Red Storm had a wild season - so much anticipation of a breakout based on recruited talent, so many sluggish offensive starts, so much lineup tinkering despite a veteran team, deep scoring droughts, a long losing streak and a long winning streak to raise hopes of a phoenix-from-ashes rise to contention.

Our preseason look back at last year's team continues by digging into the tempo-neutral factors to find a little more about what went right and wrong with the Red Storm. Data comes from kenpom.com and hoop-math.com, both excellent sites if you want to really understand what's happening with men's college basketball teams.

A lot of what's written will quantify what you know about the Red Storm - Steve Lavin's team struggled to score but stayed in games because they could block a bunch of shots - but the detail can be illuminating.

The word "enigma" fits the team that is so talented - though Ken Pomeroy's take on whether the Red Storm are actually basketball-talented or not is a must-read for the discerning fan. (Talented, but not always skillful, perhaps.) And it's not as if the stats lie - Steve Lavin's team is spectacular at some aspects of the game... and subpar in other aspects. In truth, the fact that the team hung close with the likes of Syracuse and Villanova - despite their flaws on the court and drama off the hardwood - is an achievement.

But college basketball regards winning as the true achievement, not just overcoming of adversity. And the Red Storm's next step is to win enough to reach the NCAA's postseason tournament.

Click on the text of the image below for earlier links in the Red Storm in Review series. 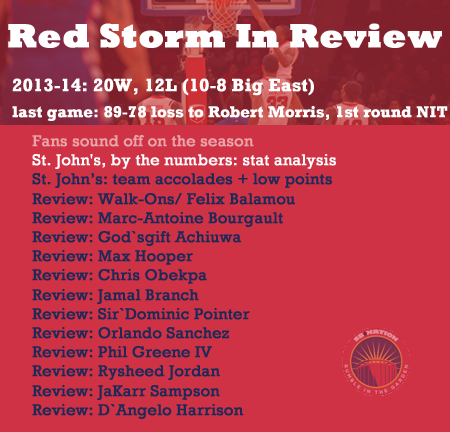 What St. John's did well:

St. John's defensive length and talent kept coaches up at night, figuring out ways to play their style against a gamechanging frontcourt. Chris Obekpa was the anchor to the top-40 defense, but by no means was he the sole reason for the Johnnies defensive prowess (though he was the most influential).

A stat nugget: the Red Storm's defense at the rim in transition was the best in the country; they allowed 48% shooting at the rim in the first ten seconds of possessions. That ability to get back and alter transition shots made opponents work to execute and score in half court sets - a tougher proposition for any team.

By dint of decent ballhandling and shot choice, the Red Storm were in the top-30 in Division 1 in protecting the ball, only turning it over 15.6% of the time.

All things equal, getting more shot chances helps an offense. Or, maybe we should say that without the ball protection, the Red Storm's offense would have been one of the worst in the country.

St. John's also managed to top the Big East by forcing opponents to cough up the ball 19.5% of the time - not an elite mark like Louisville or VCU, teams that force turnovers almost 25% of the opponent possessions, but a solid mark.

What St. John's did poorly

Red Storm fans know. Fans of Rumble in the Garden know that we harp on this.

The offense was not very good. The lack of turnovers gave the Johnnies opportunities to score, which should be applauded - and boosted the team's points per possession. But if turnovers were equal among all Division 1 teams, the Red Storm would have one of the nation's worst offenses.

St. John's managed to avoid threes almost entirely (given some of the shooting nights early in the year, like an 0/10 game against Wagner, that seemed like a good idea) while also unable to generate high-value shots at the rim. And so, St. John's operated in the midrange. That and of the court is where good defenses WANT opponents to shoot. The shooting success rate is lower than at the rim and the points earned are lower than beyond the three-point line. And teams don't draw fouls on midrange jump shots. It's a win all around, no matter the talent level.

The talent level is a factor for St. John's, a team seemingly not gifted with shooters; but those offensive attempts are also choices made and condoned by the team. Pull-up jumpers in transition, long twos off of the dribble, pick and rolls that never roll to the basket early in the offense - those are choices to take the shot the defense cajoles the athletic Red Storm to take.

When the team could get into transition, they were much better at scoring. That makes sense; scoring against a transition defense is easier than scoring against a set offense. And given the finishers on the team, St. John's was far better served making a game a run-and-gun contest.

The Johnnies, to their credit, did try to do that, taking the Big East's highest percentage of shots in the first ten seconds of a possession - kind of a game of basketball hot potato?

A look below at the offensive choices St. John's made, with the Division 1 percentage and the Big East percentage for comparison. First up: early offense.

See that extreme red dot to the right on top? 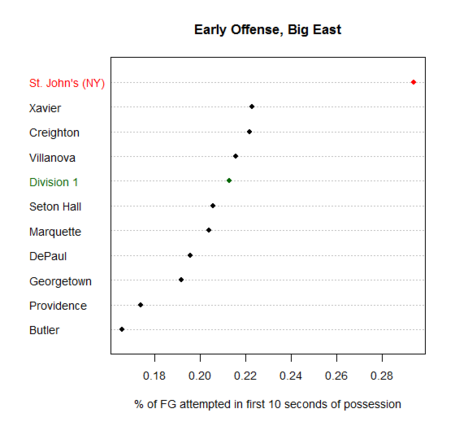 Only nine teams tried to take more shots in the first ten seconds of their offensive possessions - squads like VCU, VMI, Memphis, BYU and Iowa. That might be the best way to maximize the Red Storm's raw athleticism (and create exciting moments).

But if an opponent could get back in transition, St. John's struggled to execute and get good shots. OR, St. John's took open shots that were simply not the best shot - the pull-up jumper, the drive-into-traffic and short-unbalanced-fling jump shots that announcers would call "runners". 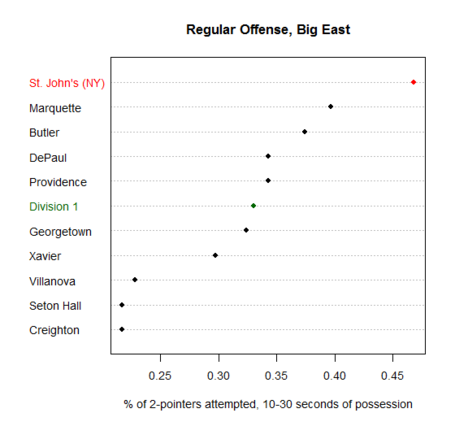 Nationally, St. John's was ninth in the percentage of two-pointers taken in the thick of the offense, with South Carolina and North Carolina, Hawai'i, and BYU taking more of those two-point jump shots that allow opposing defenses to pat their backs at their defensive acumen.

(Curiously, the Red Storm's avoidance of the three-pointer was bested by fellow mid-range addicts North Carolina and Lamar, along with BYU and South Florida and a few other schools.)

For the sake of time, I won't plot the offense in the last five seconds, but suffice to say - St. John's takes more jump shots (56.8% of their attempts, 10 percentage points more than the next-most extreme teams) and those shots equal the league's worst efficiency in late offense (eFG - 31.8%. Next worst: Butler's 37.4%).

Last year, Steve Lavin spoke to now-ESPN writer/ analyst John Gasaway, discussing how the lack of Orlando Sanchez and Moe Harkless meant D`Angelo Harrison and the rest of the squad took so many more 2-point jump shots than any other team.

Lavin went on to say that having balance would make the team's attack better, and that "numbers aren't going to drive or dictate everything you do, but they sure are a reflection of the strengths and weaknesses of your team. That's what you saw with us last year."

There is an argument to be made that the Johnnies could be better served with the upcoming year's roster as opposed to last year's team, which was Lavin's strongest squad on paper. Not that losing talent like Orlando Sanchez and Jakarr Sampson is ever good, and not that losing the three-point threats of seldom-used Max Hooper and never-used Marc-Antoine Bourgault is not also an issue.

But the team had a number of players who needed to create by isolating and dribbling, players who fell in love with the mid range. Harrison does it, Sampson did it, Sanchez did it, et cetera. A team with more clearly-defined/ differentiated roles and fewer players who think of themselves as NBA superstars in the making could open up space for a dynamic backcourt of Rysheed Jordan and Harrison.

(Assuming that their penchant for isolation plays doesn't lead to a continuation of non-cohesive basketball.)

In the losing streak at the beginning of the calendar year, the Red Storm struggled to keep opponents off the glass in Big East play, allowing over 38% of missed shots to be rebounded. And if you think that's an aberration, the team also struggled to keep Youngstown State and Monmouth off of the glass.

Perhaps it was a desire to run in transition, or an inability to mark opponents and box them out. But talented big men Chris Obekpa and Jakarr Sampson struggled to grab defensive rebounds. In Big East play, the Red Storm improved to allow 31.7% of missed shots to be rebounded - worst in the Big East, but not an offensive number. It helps to have teams like Creighton and Butler and Seton Hall, all of which do not chase offensive boards, in the league.

As far as offensive rebounds - by choice, the team did not attack the offensive glass for extra points, despite missing many shots. This allowed the team to get back in transition and take shape... but did that choice hurt the offense?

The addition of players like Keith Thomas and a need to create some more points with the departure of Orlando Sanchez and JaKarr Sampson will put that urge to get back on defense vs attack the glass to the test.